I know you’re supposed to do these on New Years (Eve?), but I like a little time to mull over them, ruminate, and make them a little interesting.

So here’s my fine-wine and properly-aged cheese list of 2019 Resolutions:

And I did go ahead and post this list on my wall, so I’m confident about the improved compliance.

Here’s to a year of dreams, dragons, and deadlines (specifically the sound they make as they pass us by)!

So here we are yet again, at the birth of another year, and as it is our goals and dreams which pull us along through continuum of time, I shall endeavor to set forth mine for 2017.

I will, of course, carry over anything which I failed to get done in 2016, but I’m going to be more concise this year, as I want to have some time left to actually go out and do these things, not just write them down.

And there you have it. Now it’s on the internet, and I can be held accountable for it come the end of the year. I doubt that will stave off the procrastination – alas, it is in the ink which flows through my veins 😉

I do wish you all a very happy, happy year in which you flourish and prosper beyond your dreams! I look forward to sharing it with you!

(I love this picture; it is tied for first place in my favorite photos of the year 2015.)

When one gets to the close of a year, a certain reflection on the past year is due. This is a look at 2015 (mostly in pictures).

It had been a busy year, and I’ve learned a lot about writing, editing and publishing books. I’ve been working diligently on my writing goals, using my cover as an author to achieve total world domination. I began my own dragon hoard of dragonish stuff, including my towel for when I go hitchhiking across the galaxy, pens, jewelry, cups, and bookends. I believe in this way I will preclude forgetting my name. I started blogging, and broke 100 followers on twitter (I’m hoping I look back on that statement some months or years from now and am able to laugh at how cute and naive I was when I was a young writer).

The biggest accomplishment came earlier in the year, when I released my first novel First Magyc and had an awesome party to celebrate (with color-coordinated decoration!!): 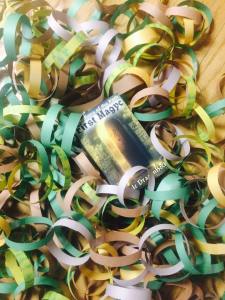 (This is other photo tied for first place in the Greatest-DragonBeck-photo-of-2015 contest.)

I started reading at local events hosted by Wordier Than Thou, and commiserating about the nervous butterflies which accompany same with Alanna Cormier helped get over the pre-show jitters in a marvelous fashion:

Naturally there were many awesome ISG meetings, and yet I don’t think there could ever be enough of that particular brand of awesomeness:

Along the way I penned a few Stories My Friends Started, which was a lot of fun.

There was the book fair: 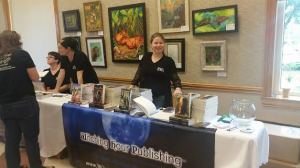 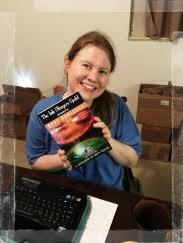 All in all, 2015 was a fantastic year; thank you to everyone who was a part of it. I am really very glad you were there to share it with me.

May the coming year bring abundant love and laughter, and as many good memories, good friends, and triumphs as there are stars in the sky, and a few dragons as well (the good kind) 😉